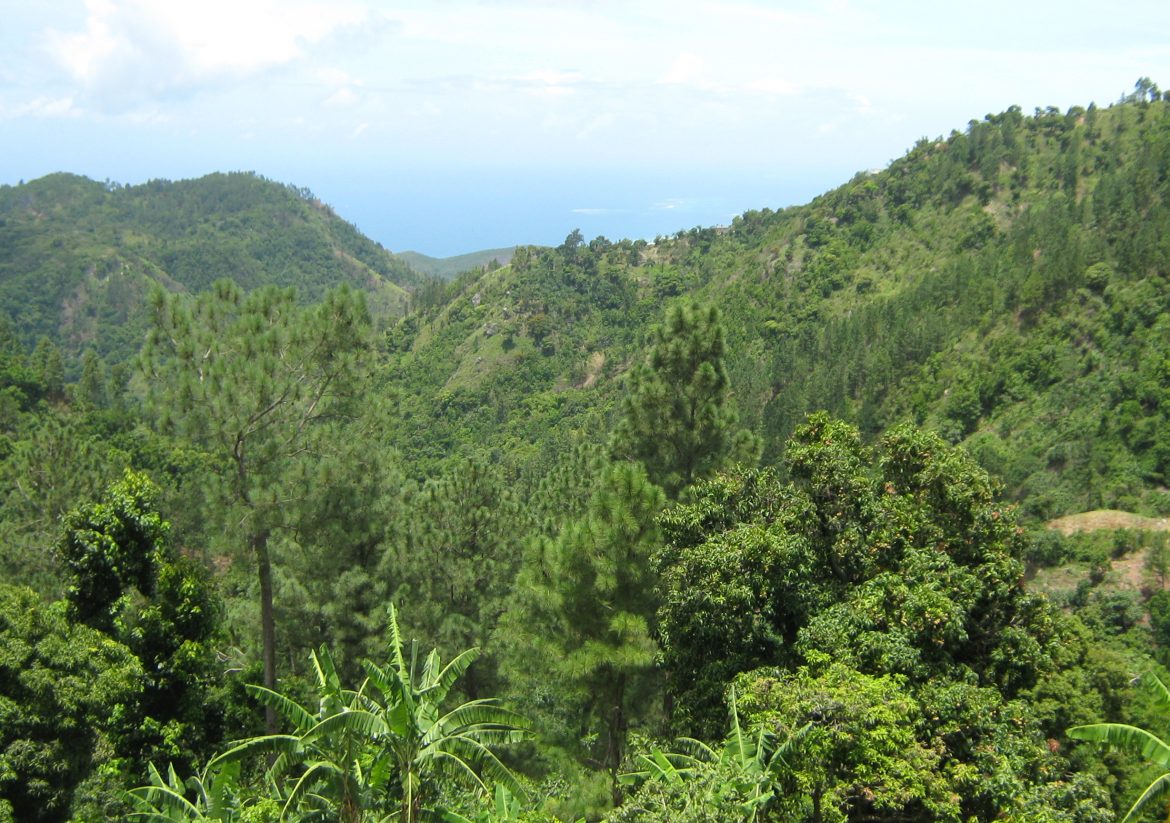 “It is the fairest island eyes have beheld; mountainous and the land seems to touch the sky.”
Christopher Columbus, 1494

When Columbus discovered Jamaica in 1494, the mountains were heavily forested. Early Spanish settlers established their hatos or cattle ranches at the foot of the Blue Mountains on the southern coast at Liguanea, the Yallahs Valley and around the Morant Bay area. However, their numbers were few and it was after the island was captured by the English that the lower slopes were cleared for farming and the forests were harvested to meet the great demand in England for Jamaican hardwoods.

Today, economic and population pressures have pushed the forest line to around 2000 ft. on the northern slopes and almost 5000 ft. on the southern slopes. The 194,000 acre Blue Mountain and John Crow Mountain National Park was established in 1992 to preserve some of the remaining forests and to protect the island’s largest watershed. The park comprises about 6% of Jamaica’s total land mass.

These diverse mountain forests have more than 800 species of endemic plants, the world’s second largest butterfly, Papilo homerus, 200 species of resident and migrant birds and is one of the largest migratory bird habitats in the Caribbean. There are also more than 500 species of flowering plants of which almost one half are native to Jamaica. Of these, the most interesting is perhaps the Jamaican bamboo, Chusquea abietifolia, that flowers only once every 33 years.

“The rich, nutritious soils of the Blue Mountain slopes make for perfect agricultural conditions, which is why the mountains themselves are so green and tropical”

The Peak, 7402 ft / 2,256 m
The traditional Blue Mountain trek is the 7 mile hike to the peak with an increase in altitude of 3000 ft. Jamaicans prefer to reach the peak at sunrise so the 3-4 hour hike is usually undertaken in darkness. The unfolding dawn is very beautiful and on clear mornings, expansive views capture both the north and south coasts. It is well worth the effort although the garbage and graffiti on the little cabins at the top are a disappointment. On leaving the cleared mountaintop, the return trip reveals the botanical richness of the mountain. The trail passes through an elfin forest of stunted soapwood and rodwood trees, their low canopy resulting from extreme climatic conditions. Gradually, the cloud forest takes over with its dense, shaded undergrowth of mosses, lichens, ferns, lianas and lesser trees and gives way to primeval tree ferns, bamboos and shrubs that peter out at the forest line above Whitfield Hall.

Blue Mountain Coffee
The once forested, lower slopes of the Blue Mountains are now mostly grasslands but some areas are used for the cultivation of vegetables, spices and the world renowned Blue Mountain coffee. The first coffee seedlings were brought to Jamaica from Hispaniola in 1728 by the Governor, Sir Nicholas Lawes. The mountain slopes were cleared to establish coffee plantations and by the first quarter of the 19th century, Jamaica was the leading coffee producer in the world.

Today, Jamaican Blue Mountain coffee is considered to be among the best of the gourmet coffees in the world. To ensure the quality, the Jamaica Coffee Industry Board set standards for the coffee beans and the processing in order to carry the ‘Blue Mountain Coffee’ label. 79% of the island’s production is exported to Japan.

Although some coffee estates remain, most of the beans are grown on small plots by local farmers. Considering the retail price of Jamaican coffee worldwide, the farmers get a pittance for their crop and some opt to roast and sell their own beans. A number of them can be found on the Kingston-Buff Bay road near the little town of Section. The process of hand picking ripe berries then drying, curing and roasting the beans is time consuming.

Each farmer has his own ‘secret’ process and is happy to explain why his is the very best. It’s an excellent opportunity for coffee connoisseurs to sample a variety of roasts and to purchase a truly unique product.

Ritajam is happy to offer these increadible different qualities and the opportunity to choose from the best selected.

A pleasure to discover whenever you try a new blend.To find the favorite one!

The FLORA of JAMAICA    It is quite rich and diverse, with 3218 distinc species and

COFFEE WORLD Coffee and art: the success of a combination that lasts over time The Coffee